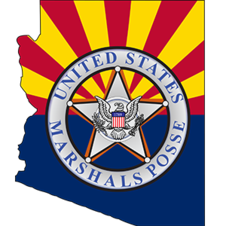 The United States Marshals Posse is a made up of men and women who are business and community leaders having a particular passion for taking on the responsibility of those who put their lives on the line for the rest of us on a daily basis through supporting, planning and the operational delivery for the annual Department of Justice Memorial for fallen officers.U.S. Marshals have a wonderful “Old West” history. One may automatically picture weathered cowboys riding the range or chasing outlaws in a gunfight WHILE in reality, they did do those things and SO much more.

1865 Until the creation of the Secret Service in 1865, Marshals were frequently called upon to pursue counterfeiters.

1865 - 1900:  U.S. Marshals were instrumental in keeping law and order in the "Old West" era and involved in apprehending desperadoes such as the Dalton Gang, Bill Doolin, and Ned Christie.

1881 - October 26- Tombstone, Arizona Territory - Marshal Virgil Earp and his deputies, brothers Wyatt and Morgan Earp, and Doctor John H. Holliday, gunned down Frank and Tom McLaury, and Billy Clanton in a vacant lot just down the street from the O.K. Corral.

1896 : July 1 - The fee system of paying Marshals was abolished.  The Marshals were put on annual salary.

1917:  World War I: While American troops fought in the trenches of Europe, United States Marshals protected the home front against enemy aliens, spies, and saboteurs.